Update on Phase I Drill Program and Exploration; Corporate Update

Providence Gold Mines Inc. (TSX-V: PHD) (“the Company”) is pleased to announce preliminary results from its phase one drill program at the Providence Group of Gold Mines, located in the historic Motherload Gold District of California. The Providence Gold Property is located in the foothills of the Sierra Nevada mountain range just east of the city of Sonora, California.  This is the first phase of a planned two phase drilling program, and the first drill program ever performed on this past historical high grade producer.

Designed to test the vein system near surface and outline additional phase two drilling targets, phase one consisted of 13 HQ size core holes. A small portion of the Fairplay vein was tested for 300 metres along strike, for a total of 562 meters drilled. Five of the drill holes intersected the Providence trend, extending the zone by 100 meters to the north. Drilling also intersected five near-surface anomalous gold targets within the Fairplay veinranging from 1.0 g/t to 3.7 g/t Au, over an average width of approximately 3 meters.

Assay results have been received from Bureau Veritas Analytical Laboratory in Sparks, Nevada . Further updates on the first phase of drill program, along with assay results, will be released as soon as possible. .

Overall, the first phase drill program results are very encouraging, having confirmed the location of the Fairplay vein system at surface and enabling the Company to focus on the structural controls of the mineralized shoots. 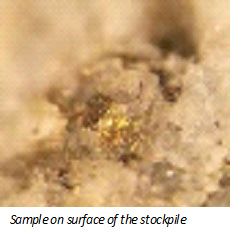 With the recent completion of an access road, the Company is now able to drill several high priority targets – including the Mexican and McCarthy veins – during its second phase of drilling. The Mexican and McCarthy mines reported historical recoveries of 4 and 5 ounces of gold per ton, respectively, and have only been mined to a 100 foot depth (30 metres). Underground drifts from the Providence workings had been planned, but not completed, prior to shut down in 1916.

Recently, a brief examination of the historical stockpile a sample bearing visible gold was discovered. The Company intends to conduct a comprehensive testing program of the stockpile using an excavator.  A set of exploration pits will be excavated and representative samples will be collected for gold analysis and measuring specific gravity.  At this time, the potential quantity of the stockpile material is conceptual in nature but an accurate determination of the location, volume and tonnage of the stockpile will result  in the target being delineated as a mineral resource.

The Company announces that Mr. David Eaton has resigned from the Company’s Board of Directors effective June 18, 2019.

“On behalf of the Board and the Company, I would like to thank Dave for his time and dedication to Providence Gold Mines during his tenure on the Board and wish him all the best in his future endeavours,” stated Mr. Ronald Coombes, Chief Executive Officer.

The Company will be seeking a mining engineer to fill the vacant Board seat, to both strengthen its technical team and meet future technical needs.

The Company further announces that it proposes to enter into a shares for debt agreement with Baron Global Financial Canada Ltd. (“Baron”) to settle accounts payable of $24,000 through the issuance of 200,000 common shares at a deemed average price of $0.12 per share (the “Debt Transaction”).  The Company will have a first right of refusal to purchase up to 100,000 of the Debt Settlement shares at a fixed price of $0.10 per share.

The Debt Settlement is considered a “related party transaction” pursuant to Multilateral Instrument 61-101 – Protection of Minority Security Holders in Special Transactions (“MI 61-101”), as Baron is related to the Company via a common director.  The Company is exempt from the requirements to obtain a formal valuation and minority shareholder approval in connection with the Debt Settlement in reliance of sections 5.5(a) and 5.7(a) of MI 61-101, on the basis that participation in the Debt Settlement by Insiders did not exceed 25% of the fair market value of the Company’s market capitalization.

John Kowalchuk, P. Geo, a geologist and qualified person (as defined under NI 43-101) has read and approved the technical information contained in this news release.

We invite all shareholders and stakeholders to join the Providence Gold Mines portal on 8020 Connect. Join here: http://b.link/Providence