VANCOUVER, BRITISH COLUMBIA – Providence Gold Mines Inc. (TSXV: PHD) (“Providence” or the “Company”) is pleased to announce that we are in receipt of a property wide geological map from its exploration program. The geological mapping @ 1:2,500 and 1:1,000 scales represents a milestone in the Company’s understanding of the gold system along 2.2 km of strike length. The high resolution mapping has identified priority drilling targets where the prominent Fairplay gold bearing vein intersects with structurally linked hanging wall and footwall splay veins. The geological map will be posted with the News Release for review on our website at www.providencegold.com and at SEDAR.

We believe these areas of convergence within the vein system represent potential new mineralized shoots similar to historically mined shoots which are easily accessed and remain open to depth. In addition, the mapping of potential gold zones is coincident with anomalous gold in soils from the 2017 geochemical survey.

Providence Gold Mines Inc. has an option to purchase a 100% interest in the Providence Gold Property located in the Eastern Belt of the Motherlode Gold District near the town of Tuolumne, California. Access to the property is by a combination of paved and gravel roads.  Individual veins range from less than a centimeter to more than 3.0 metres in thickness with the overall average being 1.5 metres.   Sulphide content is <2%, consisting primarily of pyrite and galena.  Within the veins several steeply-plunging shoots of higher grade gold, mineralization was mined in the past, commencing as early as the 1860’s.

Gold production was primarily from the northernmost 1200 metre segment of the Providence Gold Vein system hosting from north to south the Bonita, Consuelo and Providence Mines.  In the 1894 Report of the State Mineralogist it states “…On the Bonita vein a 440’ adit has been run and in it about 300’ from the mouth a 50’ winze sunk…”    In his report dated April 1932 Thompson states “…at the north end of the Bonita claim another mineralized shoot has been developed.  A small mill was used to reduce the mineralization from this shoot.  The mineralization was very good and this shoot, as far as worked, paid handsomely…”

John Chapman, Superintendent for New Providence Gold Mines in a memo dated June 1933, with regards to the Consuelo Mine states “…the Consuelo mineralized shoot lies about 1800 feet north of the Providence shaft…This mineralized body has been attacked at two points, 300 feet apart by the McCarthy shaft on the south of the gulch and the Mexican shaft on the north to a depth of 100 feet to the present tunnel level.  Eighty feet south of the Mexican shaft, a winze was sunk to a depth of 90 feet in the vein fissure.  The vein filling at this point indicates that mineralization is in the making and should be encountered at any time.  The vein material is about 6 feet wide and carries $1.50 in values.  Work is now being undertaken in this winze, at a depth of 100 feet a drift will be driven north under the Mexican Shaft.  The mineralization produced from this shaft ran $80/ton.

The Providence Mine operated until 1916.  Development at the mine consisted of a double compartment shaft sunk to a depth of 1470 feet on the dip of the vein system (50o).  Drifting was completed on twelve levels. Production was from stopes located throughout the workings.  According to Bluett (1916) “…some of these mineralized shoots and veins have been stoped out.  In others the mineralization is still in place…”  According to a newspaper clipping dated April 7, 1931 the Providence Mine ”…from 1902 to 1912, when the mine was owned operated by E.A. Wiltsee of San Francisco, yielded gold mineralization averaging $18 a ton (gold at $20/ounce) to a total of $3,000,000…”  According to a September 14, 1921 report by James Kendall “…the mine was not closed down for lack of good gold mineralization, but because of a disagreement between the owners and the parties to whom the mine had been leased, at the expiration of which the owners refused to grant an extension and suspended operations in the midst of active mining and milling of high grade gold mineralization from the 10th and 11th levels and while good  mineralized bodies were being developed on the 12th levels after which the lower levels filled with water and have never since been de-watered.  Thus the  mineralized bodies in the lower six levels are in identically the same condition as they were when the mine ceased operations…” Various reports have the gold production from the Providence Mine ranging from $700,000 to $4.5 million.

The surface workings and mills of the Providence, Consuelo and Bonita Mines along with the operation records were destroyed in a large brush fire in 1918.

Because almost all of the technical information was destroyed in the 1918 fire, there is no way to document the accuracy of the above statements.  The above historical account was taken from several miners and engineers who either worked in the mine or visited it while in operation.  Although this information is believed to be factual the Company cannot unequivocally confirm its accuracy.

Soil sampling was completed over the entire length of the property.  The results showed anomalous gold values in soil correspond with the Providence Gold Vein system, particularly over the section hosting the Providence, Consuelo and Bonita Mines. Gold values within this trend range from 10 to 7300 ppb.  Elsewhere on the property additional zones of interest were identified requiring additional follow-up work.  Underground continuous rock chip sampling located several areas in the underground workings with significant gold values.  Results include samples assaying 45.63, 19.58 and 31.7 gpt Au over widths of 1.30, 1.0 and 0.7 metres respectively.

A 3D Laser Survey was completed that not only revealed the geometry of accessible 600 level underground workings to mm accuracy, but also elucidated geological features, including the veining and structure.  The survey showed a 260 metre long zone between the Consuelo and Providence Zones to potentially host an area of quartz veining.  This zone lies to the west of the 600-level access drift and is possibly the down dip extension of the area mentioned by Bluett (1909) as having several shoots of mineralization between the Consuelo and Providence Mine.

John M. Kowalchuk, P. Geo, a geologist and qualified person (as defined under NI 43-101) has read and approved the technical information contained in this letter. Mr. Kowalchuk is a senior geologist consulting to the Company. 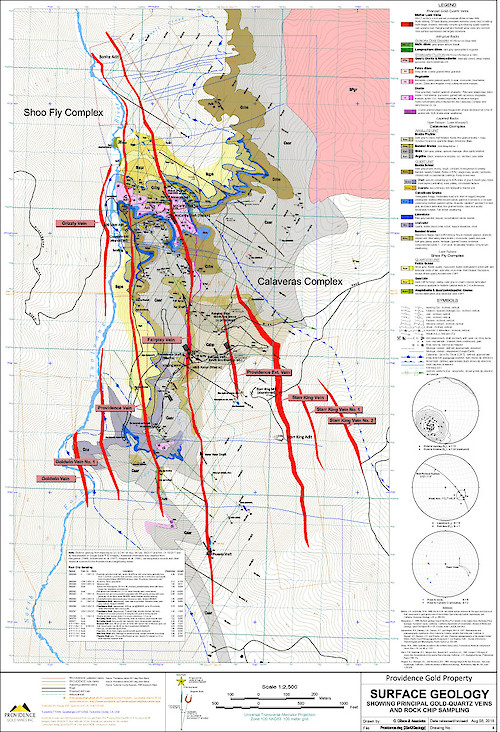