In addition, the Company is extremely pleased to have Mr. Brian Ray M.Sc., P.Geo., accept the appointment as Head of Exploration and Development for the Providence group of Gold Mines. Mr. Ray has over 38 years of exploration experience in North and South America, as well as in Europe. These include over 20 years as a consulting geologist working with a variety of clients and focusing on field exploration work. He also played a key role in the discovery and the advancement of several deposits including Hope Bay (12.3 million ounces) gold deposit in the Nunavut, Canada, and the Toruparu gold deposit in Western Guyana where he was responsible for preparing the first mineral resource.

Brian Ray states, “I have been involved in the development of several significant gold deposits in my career. I have also visited the Providence group of gold properties, before accepting my appointment as Head of Exploration and Development and I am very impressed with the geological setting and with the properties’ historical production, which together give significant potential.”

The first phase of the drilling program contained 13 HQ size core holes (Figure 1, Table 1) designed to test south-central part of the vein system near-surface along the strike of over 300 meters, totaling 562 meters of drilling. This has given the Company good confidence for the upcoming second phase of drilling.

Further evaluation of the drill core has identified several unsampled zones (figure 2) of significant alteration. This core is being split and sent to the lab this week. The objectives of this additional sampling program are to confirm that near surface zones of significant mineralization have gone undetected and to develop a better understanding of the geological and structural controls of the gold mineralization. The company anticipates that our prudent geological understanding of the mineralization footprint and controls will lead to new mineralized exploration targets near surface with the expectation of expanding both the historically mined mineralized zones and lead to the discovery of new zones of high-grade mineralization.

Five of the drill holes intersected the Providence trend, extending the zone by 100 meters to the north. The drilling also intersected five near-surface anomalous gold targets. 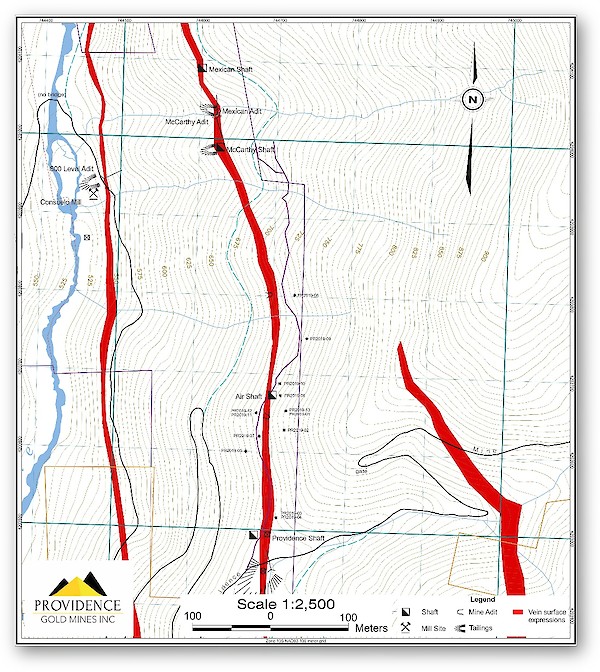 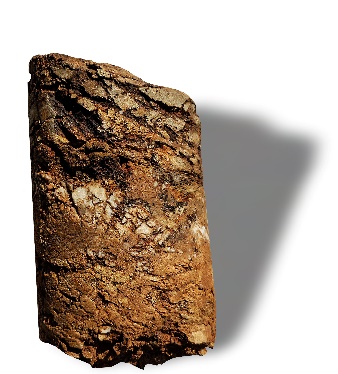 Over the past few weeks, the Company sampled the peripheral south east side of the stockpile at a depth of 0.5m on a grid with sampling stations approximately every 3m. The surface area of the stockpile was approximately 50m by 50m square and appears to have a depth of approximately 10m. The samples were sent to Bureau Veritas Laboratory (Sparks, Nevada). Results are pending. Surface trenching and further grid sampling continue this week. It’s worth mentioning that in the early 1900’s when historical production ceased due to a dispute, the recovery technique in the milling process would have been via stamp mill crushing and then processing that material through a sluice box. This method is known to have recoveries of below 50%.

Ronald Coombes, President & CEO states: “We are very pleased with our continued exploration success, this week we begin trenching and sampling along strike towards a nearby cross structure from our phase one three-meter HQ drill core intercept near surface. These cross structures appear to be one of the controls for the mineralized shoots. In addition, further evaluation of our new discovery of the stockpile and potential it and other stockpile locations may yield continues”,

While recently traversing to the McCarthy Mine through some very dense overburden, a historical mining road in good shape was discovered which will greatly reduce our access costs to this area of the property.

Mr. Brian Ray M.Sc., P.Geo Head of Exploration and qualified persons as defined by NI 43-101, has reviewed and approved the technical content of this press release.

We invite all shareholders and stakeholders to join the Providence Gold Mines portal on 8020 Connect. Join here: http://b.link/Providence